Back in January I joined a Mystery Knit-a-long jointly run by designer Lara Smoot and indie dyer Indiewayarns.
I used "Ruby Tuesday" to knit a hat and mitts.

It was great fun following the clues each week, and finally ending up with a lovely hat. 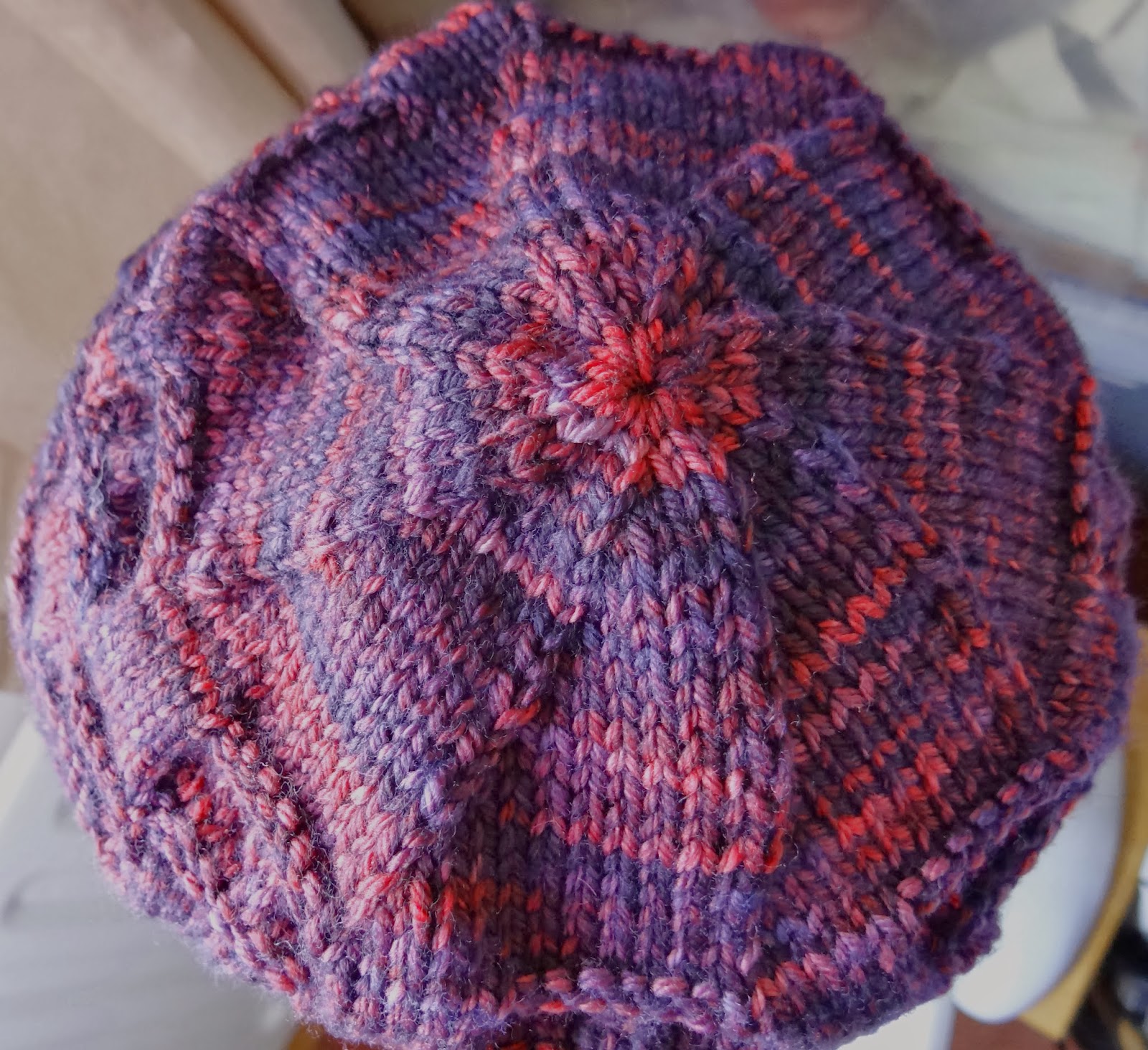 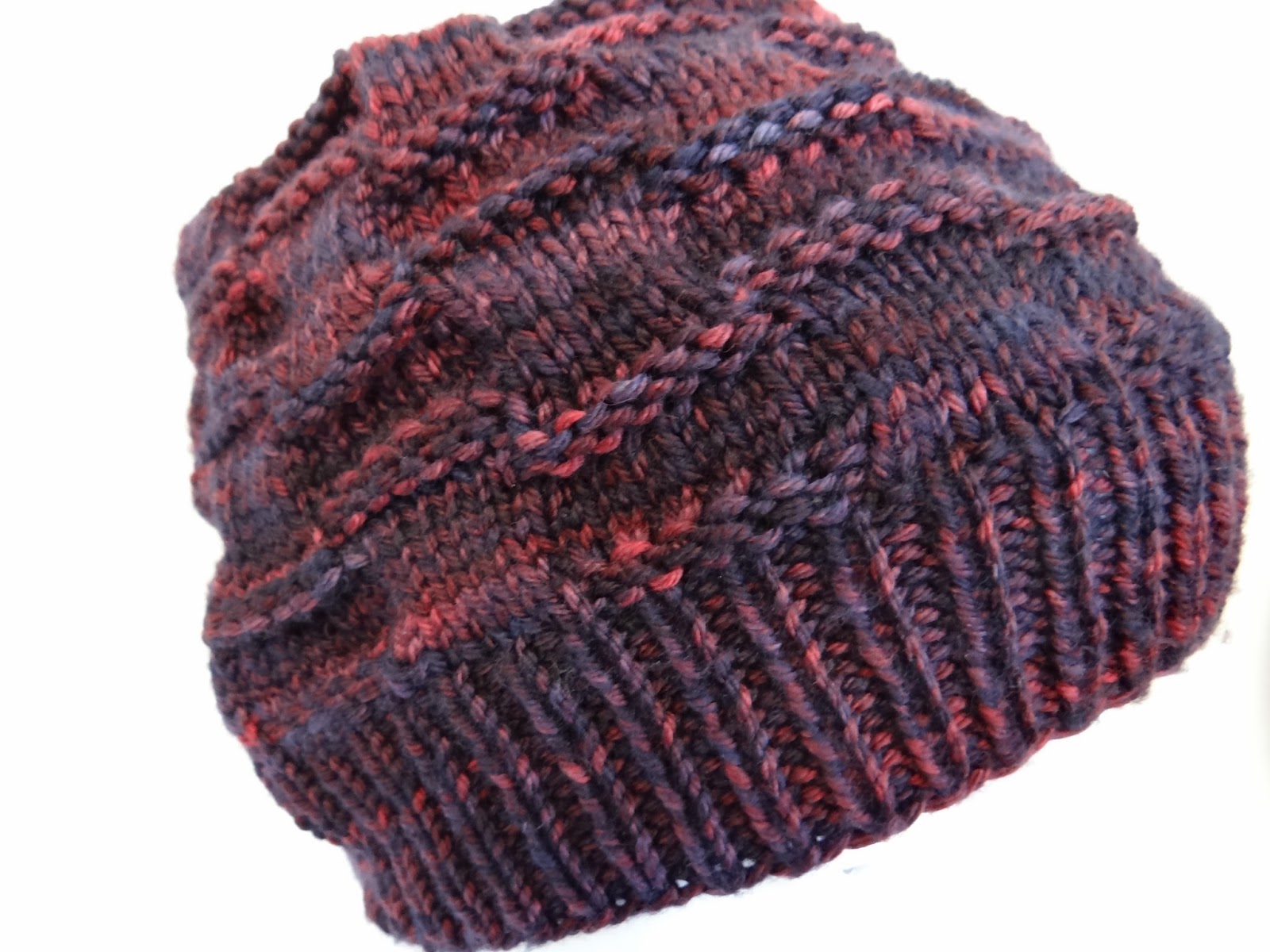 These are the mittens.
I really like them.
I've never had mittens without a ribbed cuff before. 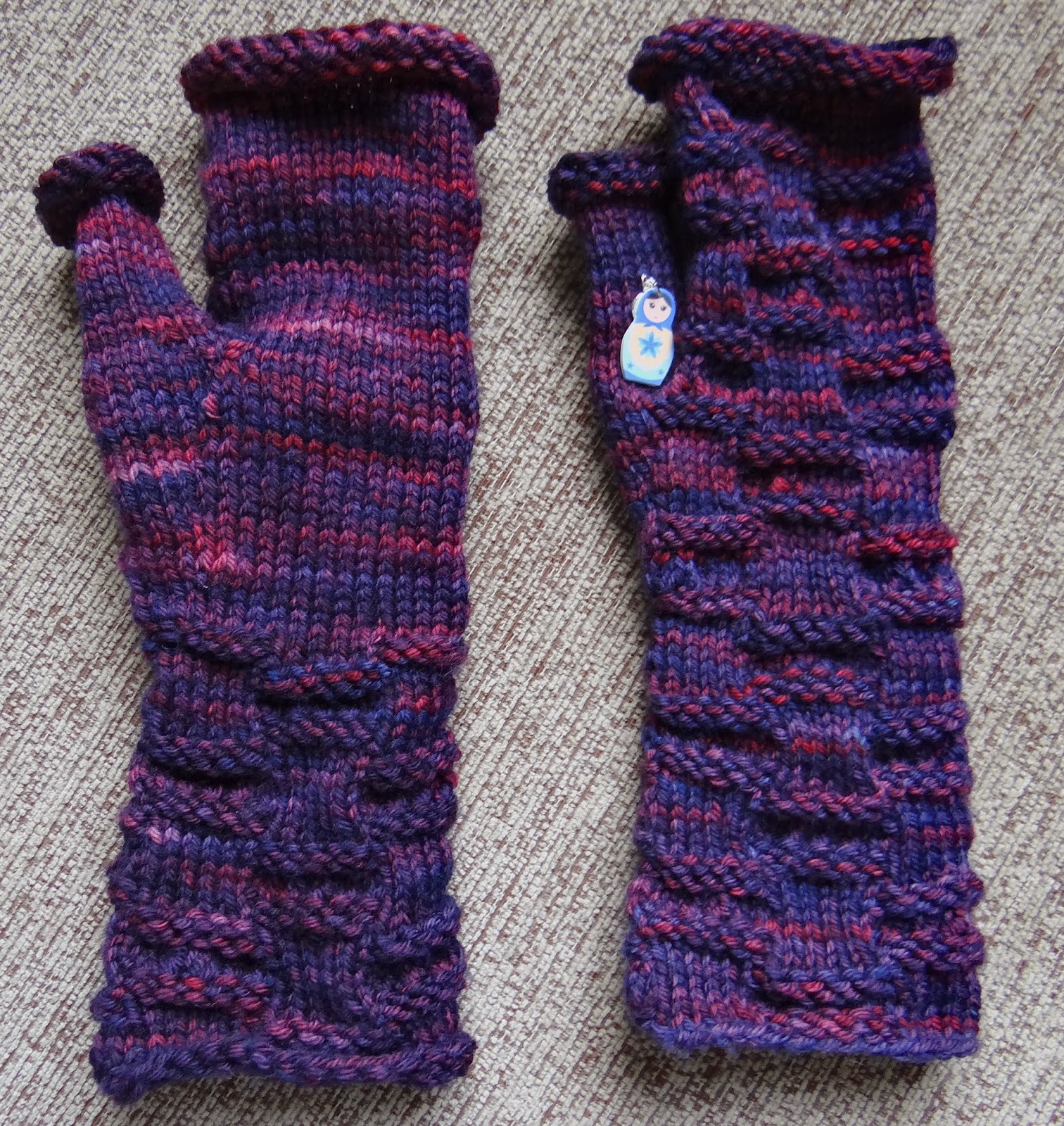 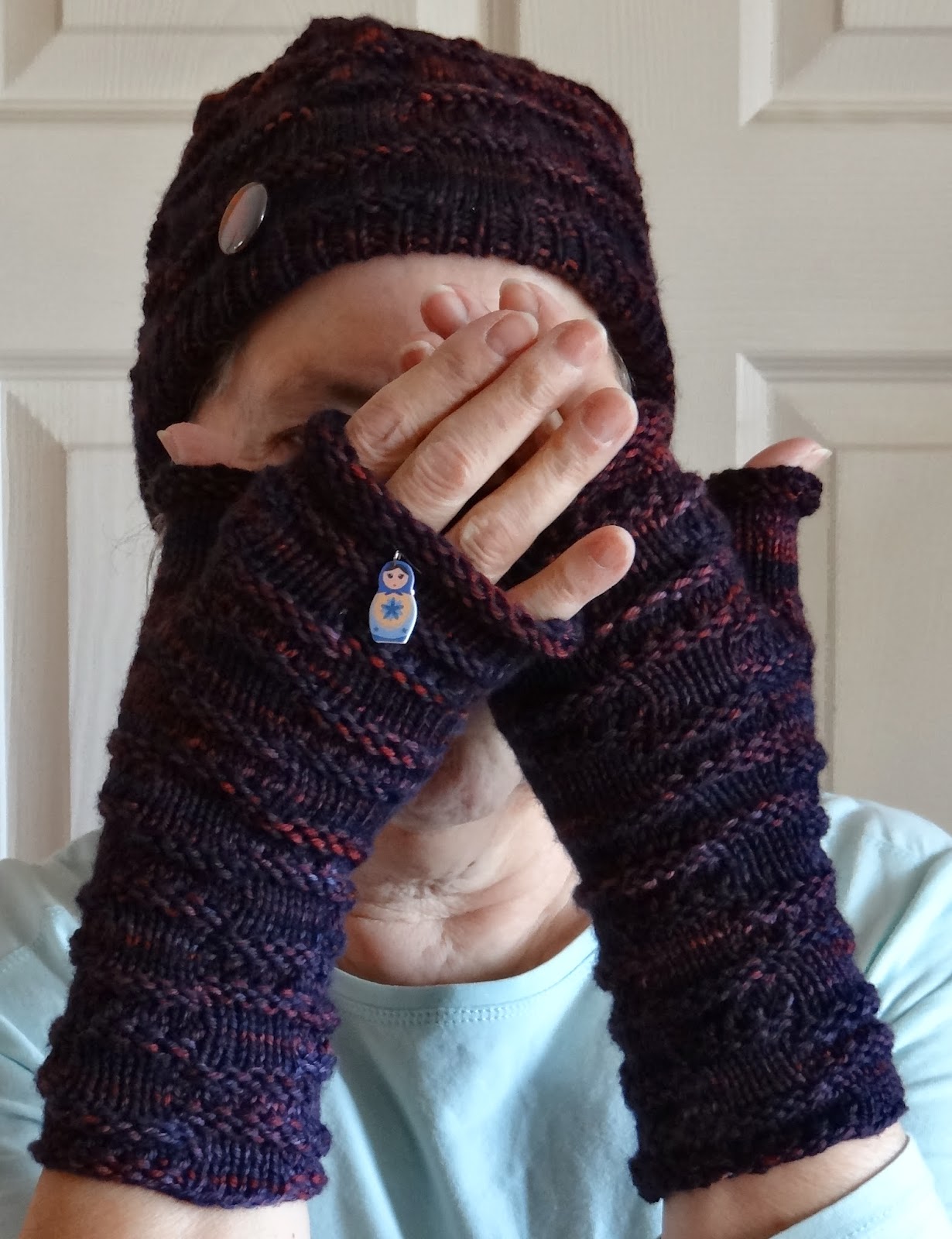 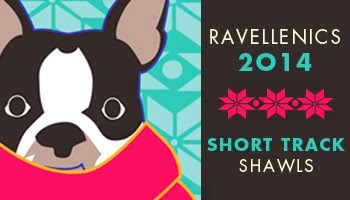 Ravelry, a group for all those who love playing with yarn, issued a challenge for members during the Winter Olympics.
We were to challenge ourselves to complete a project.
I chose to knit a shawl with lace inserts.
Iridil, designed by  Lara Smoot.
The lovely yarn was dyed especially for the event by Indiewayarns, and called Bolshoi Lights.
I challenged myself to complete the shawl within two weeks.
I took five days! 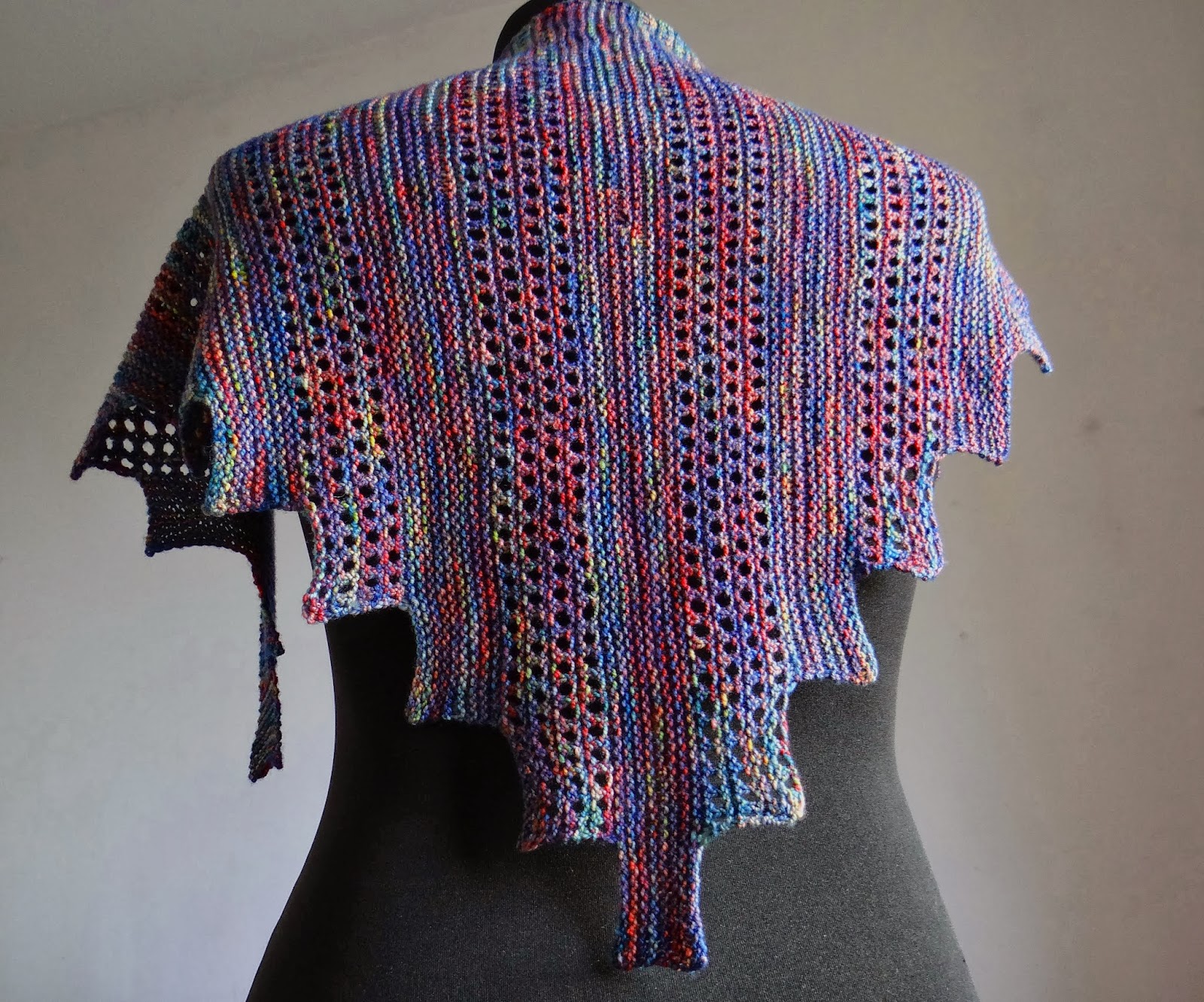 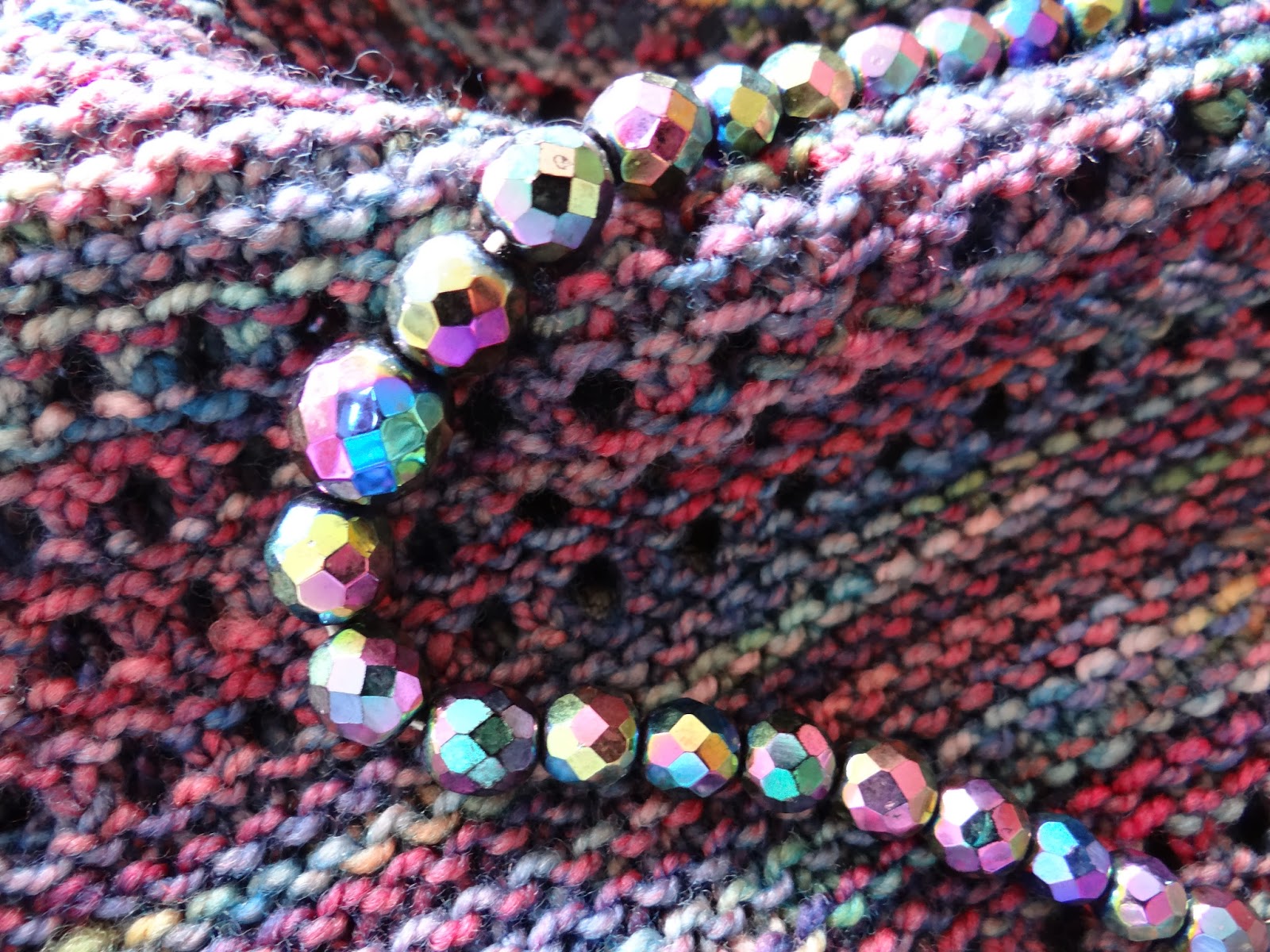 I'm so pleased with the result!

Last month I saw a ball of acrylic yarn in the local Aldi.  At the time I had nothing that I really wanted to knit, and it was a colour that appealed to me, so I bought it. 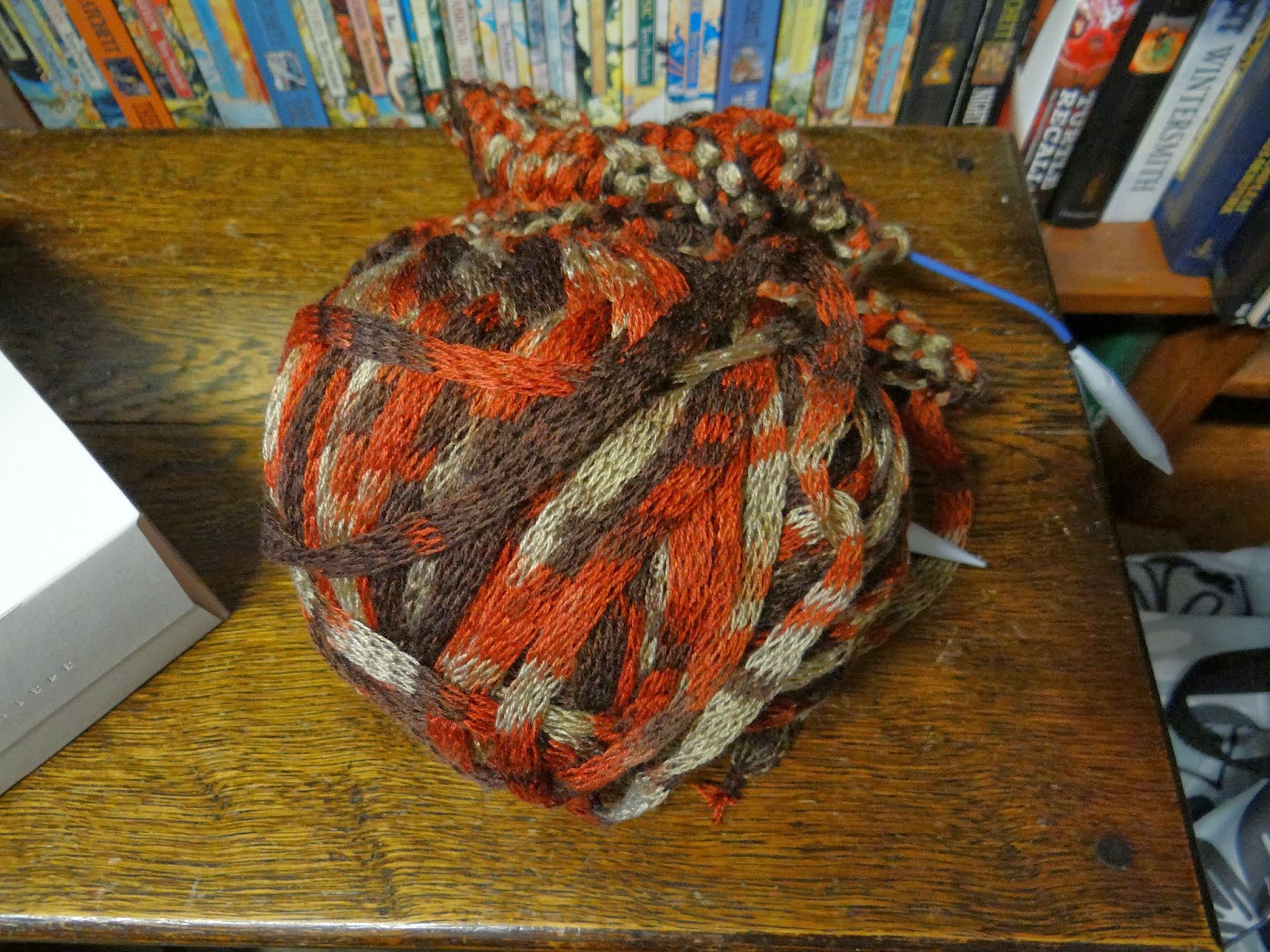 The pattern was printed inside the ball band and was simple enough to follow in my half-sleep, so I started.
Five days later the scarf was finished. 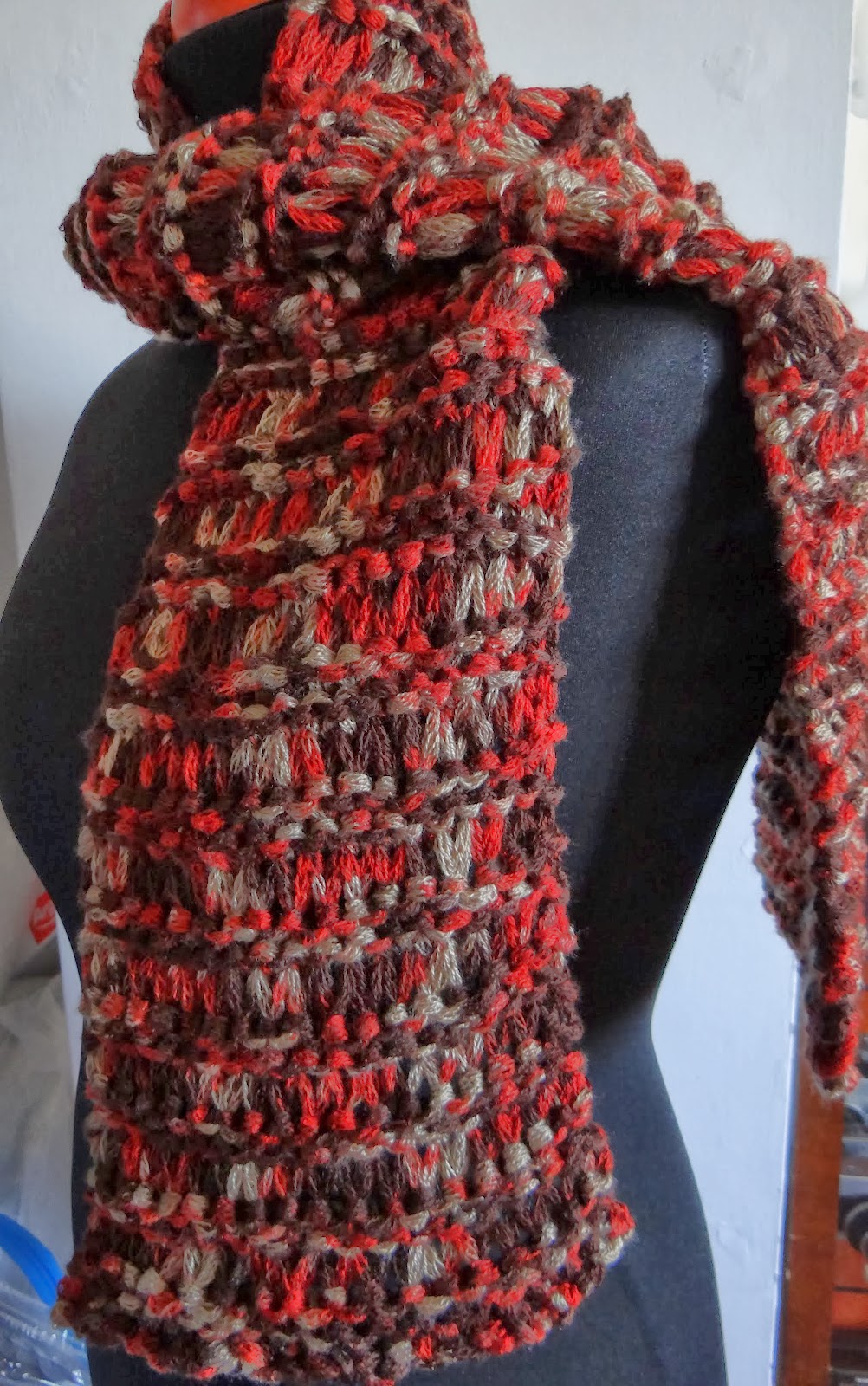 The yarn isn't as soft as I usually like, but it's nice enough, and useful in cold weather.

Speaking of cold weather, my poor husband has been suffering from chilly hands.  I made him a quick and easy pair of One Cable Mitts in two days. 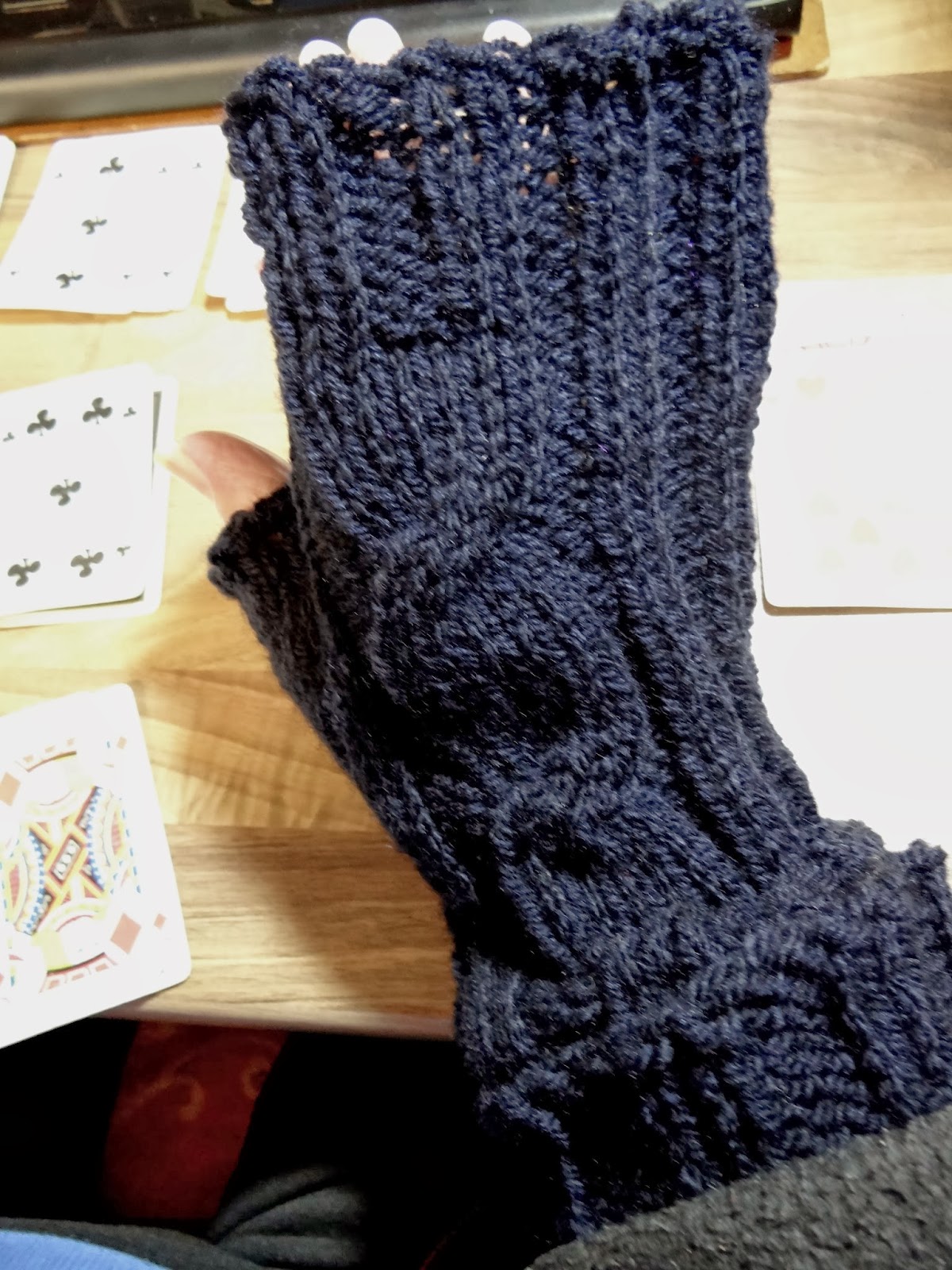 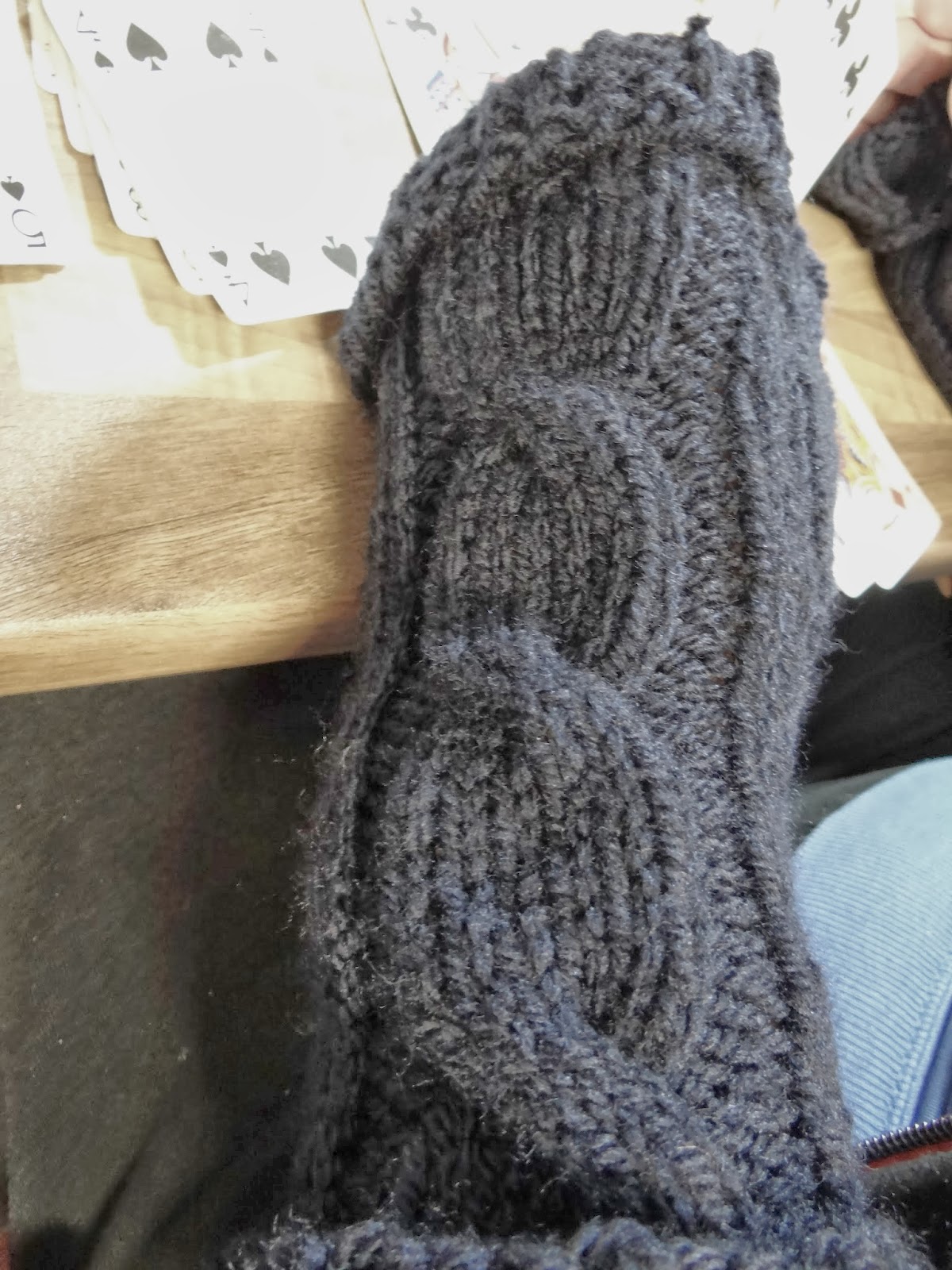 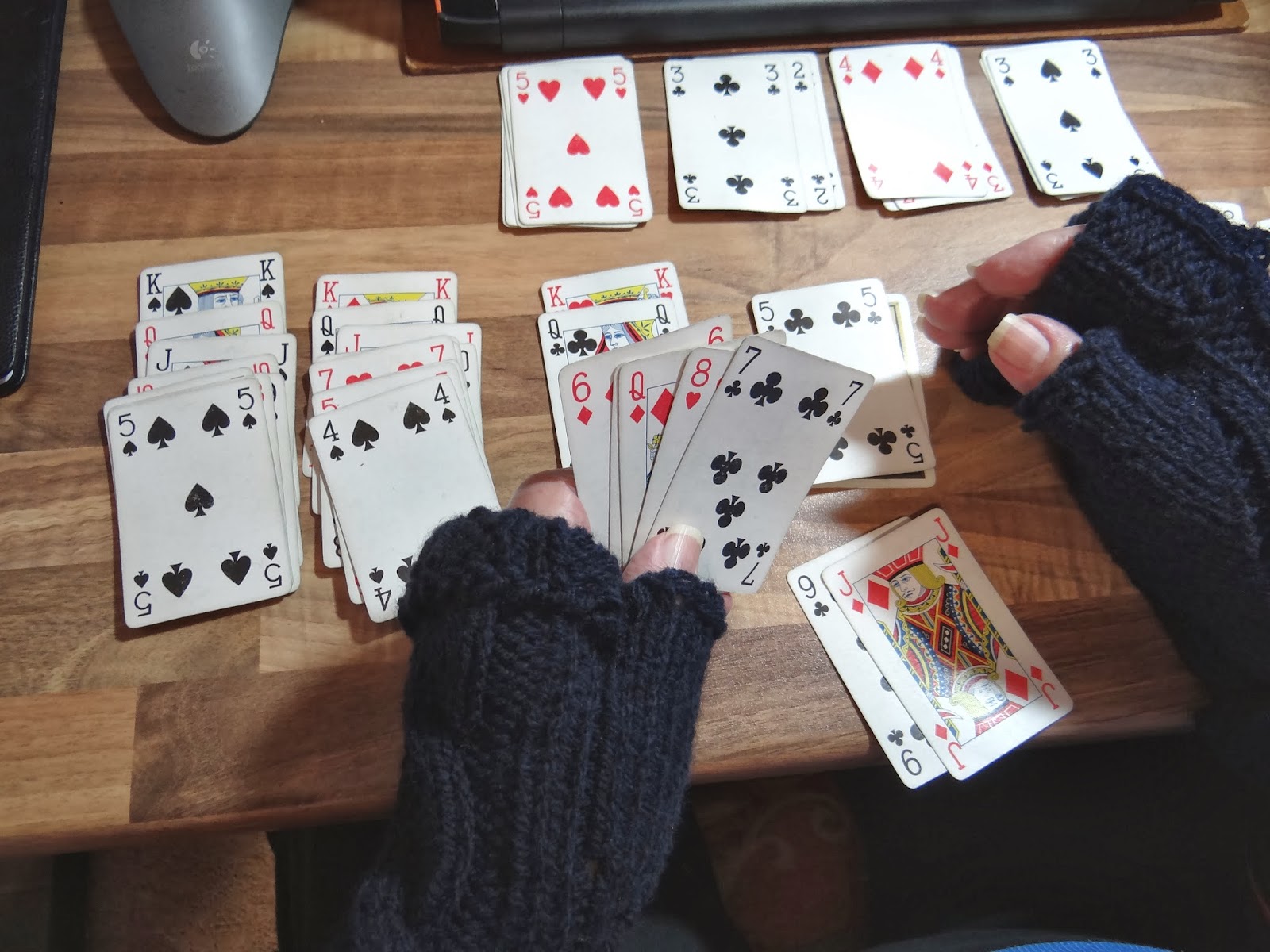 These two quick projects were very useful in keeping my brain and fingers working.
Posted by Dragonstar at 6:07 PM No comments:

It seems I've spent a lot of time not updating this blog!
I have been knitting, just not saying anything about it.
This has to change!

This year started with an Afghan for my impecunious student daughter who needs to keep warm with minimal expenditure on heating.
I saw Lion Brand's Six Hour Afghan.
I thought it sounded like a good idea for a quick Christmas gift, so I bought some yarn and a 25mm circular needle. 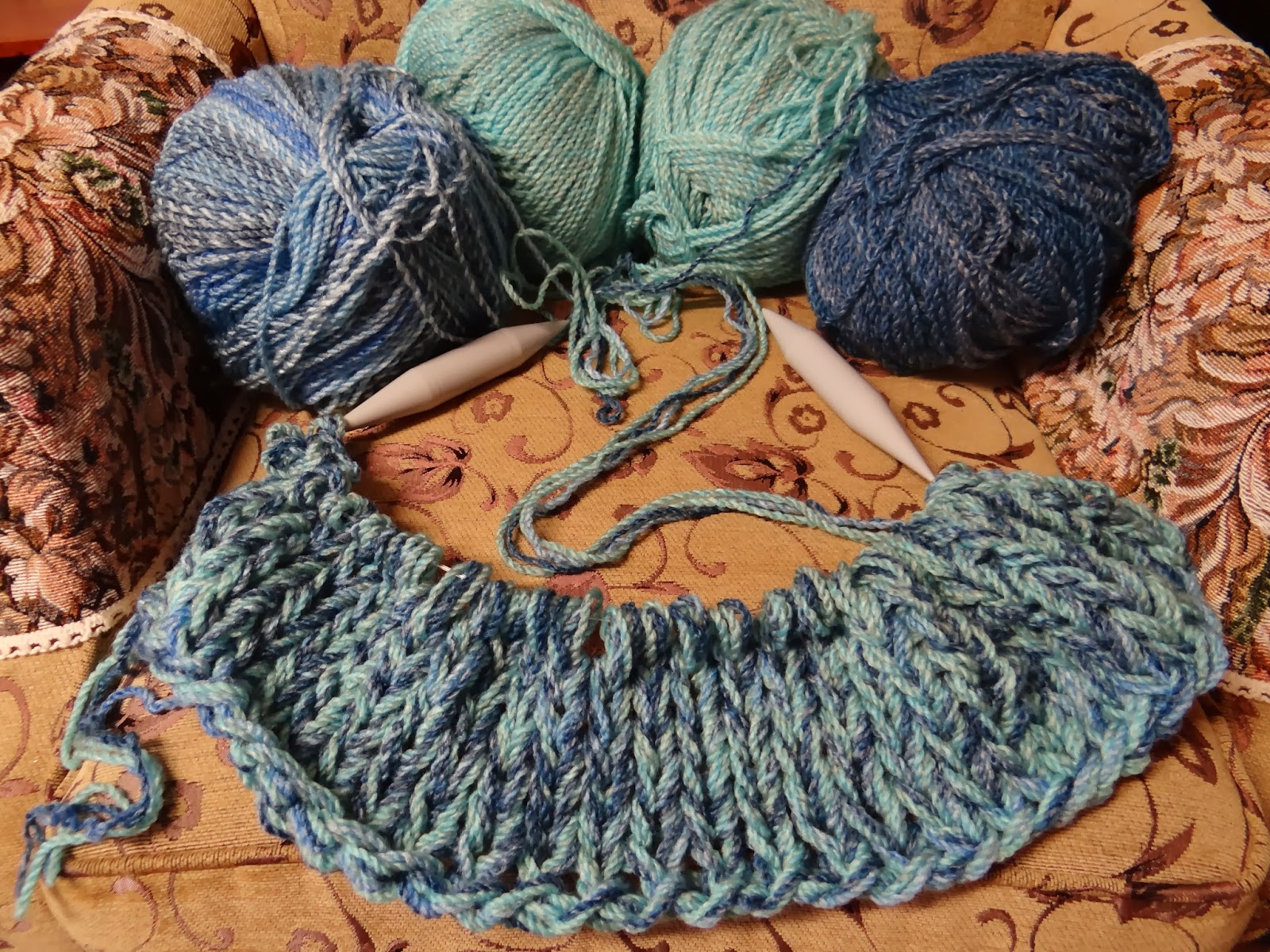 I use circular needles for everything, but this was not my greatest idea ever.  Forcing the stitches back onto the needles from the thin cable took a lot of effort and a fair amount of bad language.
Fast forward to the arrival of 25mm straight needles.  These were considerably easier to use. 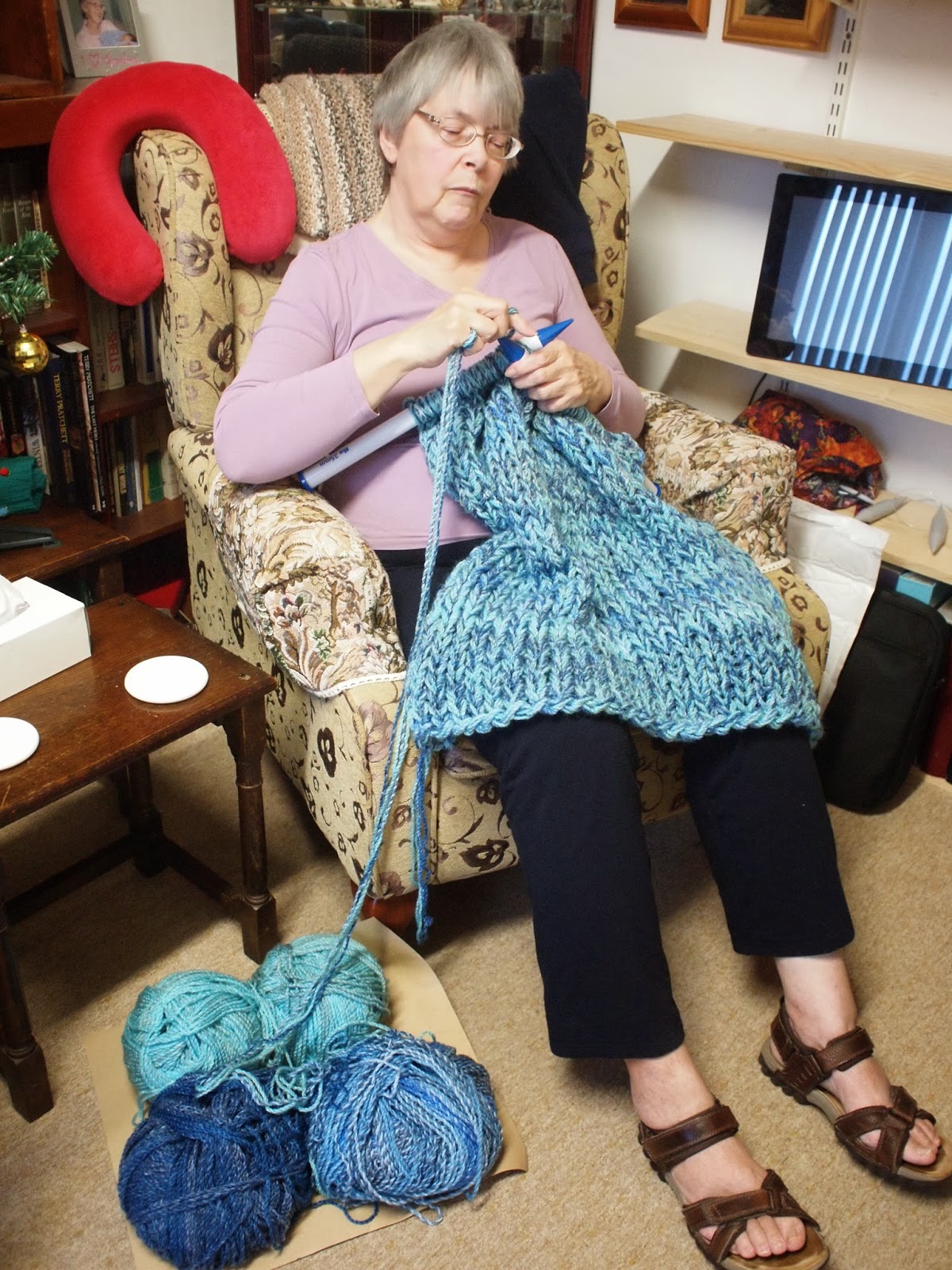 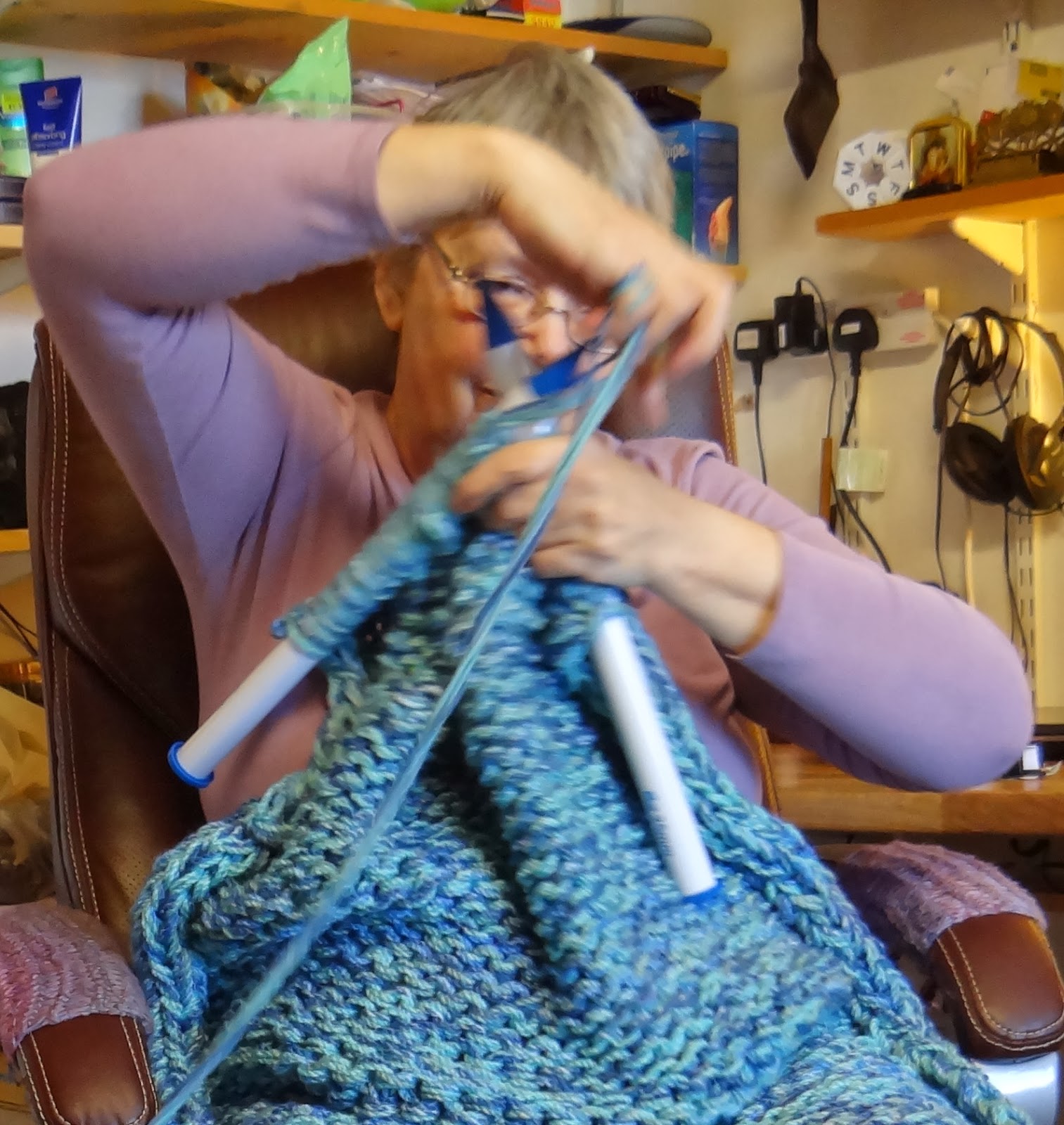 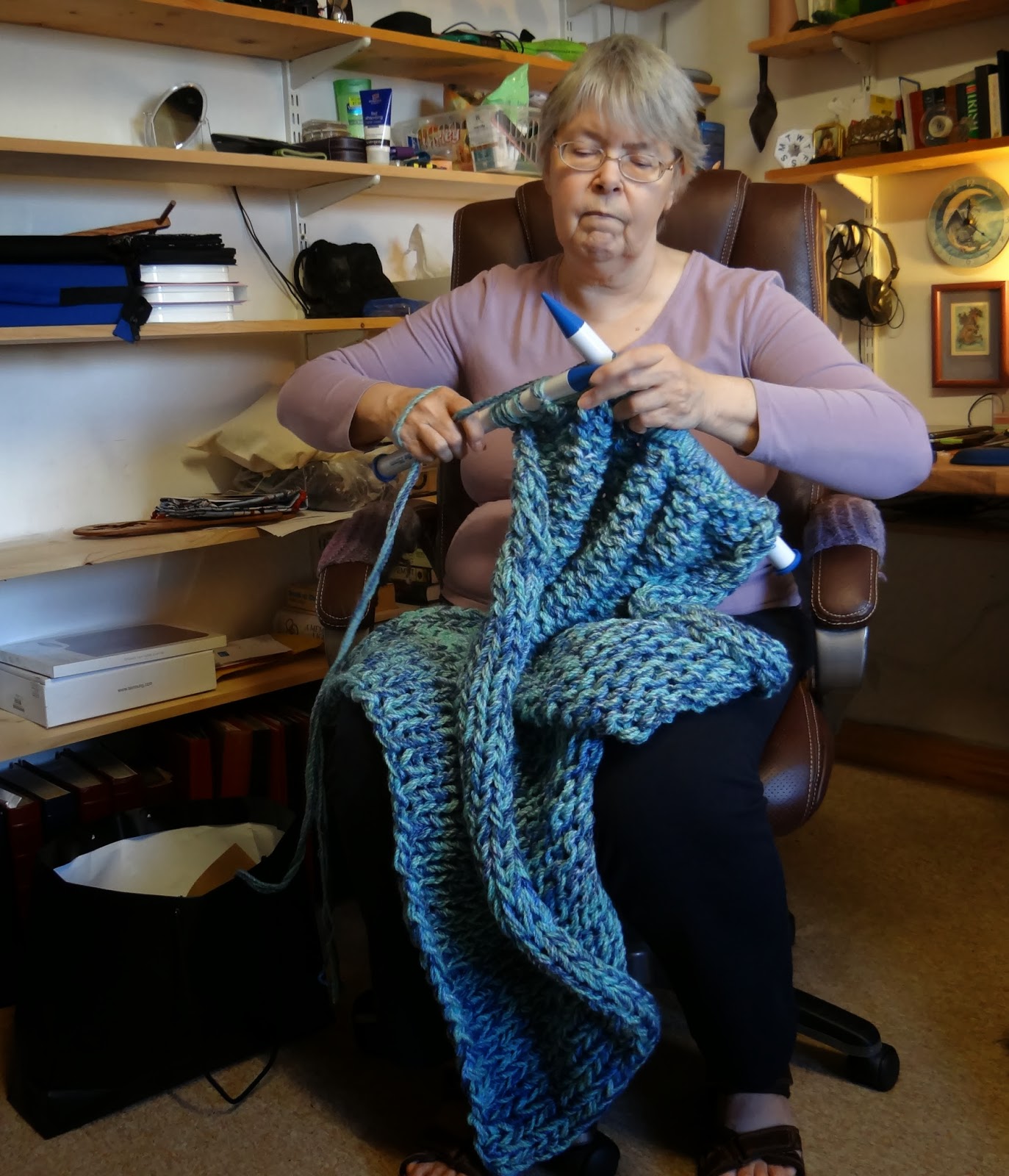 Finally, I finished it.
The Six Hour Afghan only took me four weeks! 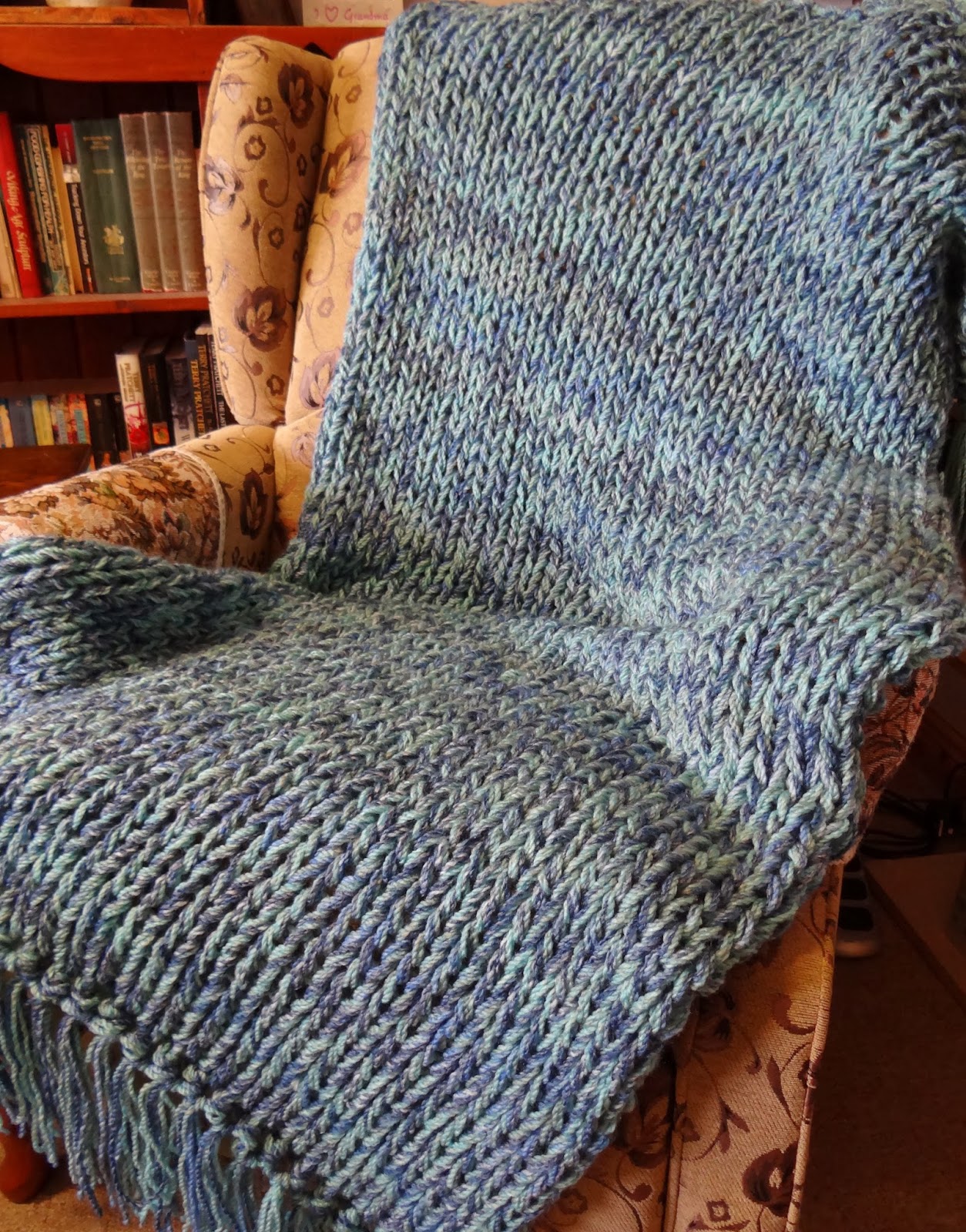 At least my daughter finds it warm and useful.

Posted by Dragonstar at 11:33 AM No comments:


Made brave (foolhardy?) by my previous success, I embarked on another sock project.

This time I cast on
Waterfall Socks by Wendy D. Johnson.
I used Spring Showers, a 75/25 merino/nylon sock yarn by inspinknitty (KnittyKnotty) 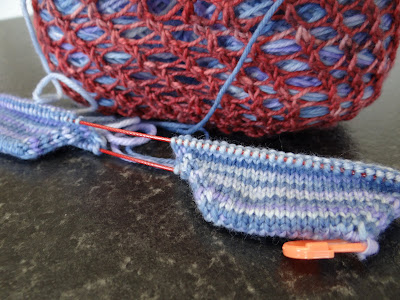 This pattern proved much more interesting than the previous one. It has a simple but pretty lace pattern.

I have thick ankles and broad legs (you wanted to know that, didn't you?) so I wanted a nice stretchy cast-off. A bit of research led me to Jeny's Surprisingly Stretchy Bind-Off, so I tried it.
IT WORKS! 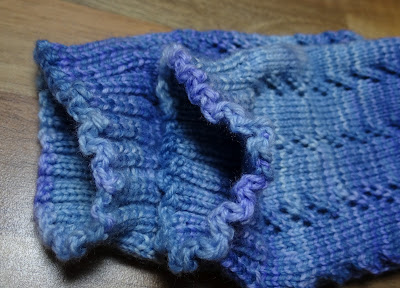 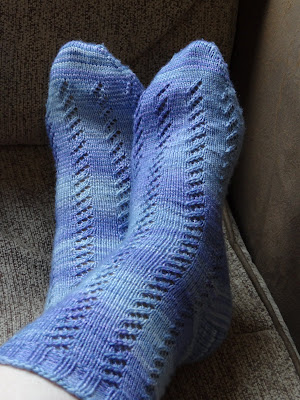 A pretty pattern.
I think there could be more socks in my future.
Posted by Dragonstar at 2:30 PM 2 comments:

Many, many years ago, in the dim and distant past, I made a pair of socks for my daughter. I used four double pointed needles, and it took ages. I doubt if I'd have finished if I hadn't promised my daughter!
Back in July I was persuaded to join in a sock KAL run by Indieway. Her yarns are beautiful, and she's such a lovely lady, so I took my courage in both hands and metaphorically jumped in the deep end.

I cast on
Two at Once, Toe-Up Magic Loop Socks by the Knit Picks Design Team, using Indieway's 80/20 sock yarn in Wildfire.

It was a learning curve!
Controlling the magic loop was a challenge, but a lot easier than juggling the double pointed needles.
Knitting two socks at a time at least makes sure both socks get finished, but I can assure anyone who wants to know that stocking stitch is boring - particularly two lots in one go. 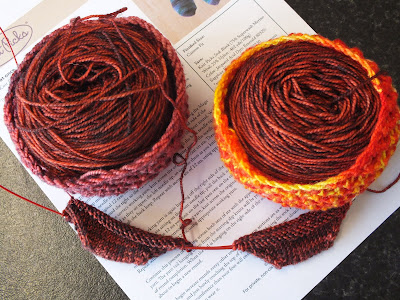 Still, I finished.
They're very warm and comfortable. 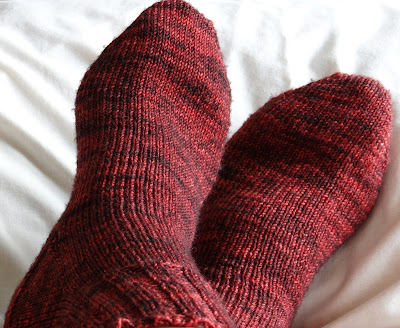 I'll be doing this again.
Posted by Dragonstar at 6:23 PM No comments:

I've just finished this sweet and easy shawl designed by Irish Girlie Knits.
I had a need for a simple knitting project that required very little brain power.
In spite of being a gently lacy design, this shawl really filled the bill.
I made the small version in a lovely, soft, baby camel/silk yarn from Indieway Yarns in a pale golden colour, and the result is a truly cuddly shawlette.
Thank you ladies! 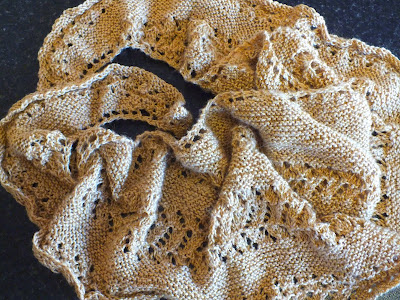 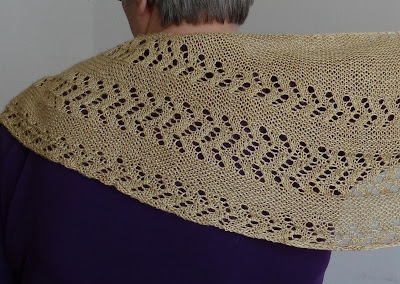 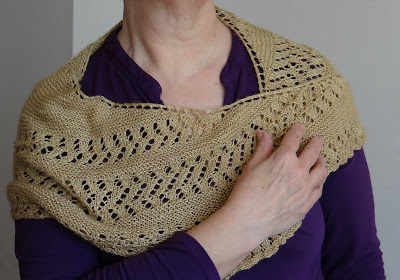 THE WEEKEND IN BLACK AND WHITE
A weekly photo-challenge, originally run by my husband and now by me.